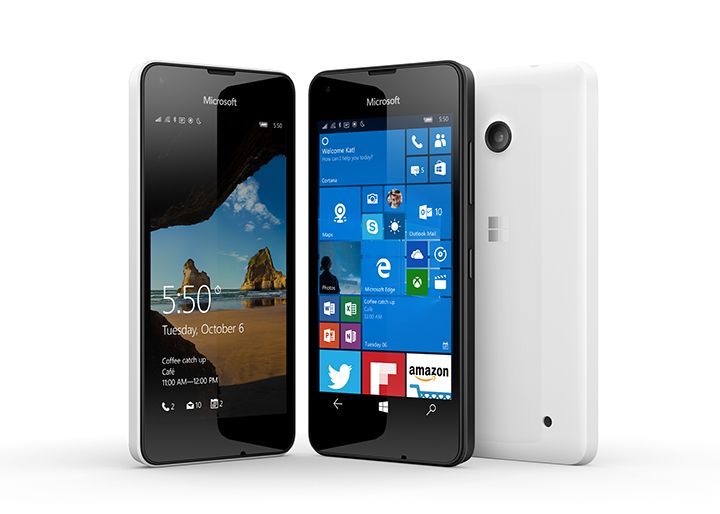 The Lumia range of smartphones goes up to high end phones like the Lumia 950, however it’s the lower end segment that finds buyers owing to its great performance with basic hardware.

Microsoft Lumia 550 certainly belongs to the lower end, but comes with 4G and Windows 10, keeping up with the current trend and expectations of the mobile world. However, with just these 2 factors backing it up, it might feel overpriced at $139.

Well, let’s have a look at its features:

The Microsoft Lumia 550 comes with a 4.7-inch 720 x 1280 screen with a pixel density of 315 pixels per inch. For a budget phone, it’s fairly large and high-resolution making it pretty crisp and clear. It comes with Gorilla Glass 3 protection as well.

In terms of design, it’s just like any other Lumia phone with a plastic shell. There are also no colors available apart from plain black or white. It’s also not slim or light at 9.9mm thick and 141.9g, but the build quality is solid. The cover is removable and so is the 2,100 mAh battery.

There’s a 1.1GHz quad-core Snapdragon 210 processor and 1GB of RAM that powers the Microsoft Lumia 550 which is certainly nothing impressive.

You get what you pay for, and the camera quality proves it well. There’s a 5MP snapper on the back with an LED flash. At the front it has a 2MP camera which is more than adequate for selfies.

The best feature of the model is Windows 10 Mobile, which makes it the first plug-and-play Windows 10 mobile out of the box. It comes with a better version of Cortana, a new browser, and plenty of other features.

In addition to this, you have the presence of 4G on such a cheap handset, ensuring that you access the fastest network available from your carrier.

There’s just 8GB of internal memory, but it has an expandable memory support of up to 200GB.

Although it lacks a lot of features like NFC and fingerprint scanner, for the price tag it has, and Windows 10 loaded, it’s an affordable buy.